Calculus 10.5 (Equations of Lines and Planes)

A line in 3D is determined when we know any point on the line and the direction of the line
What two things are needed in order to describe a line? 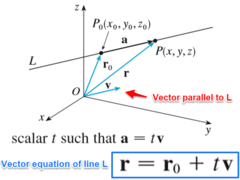 Change the vector equation of the line into Cartesian form and isolate each basis component (x,y,z). These equations give the Cartesian components of a point on the line depending on the value of the parameter t
How are the parametric equations of of a line found and what is their significance? 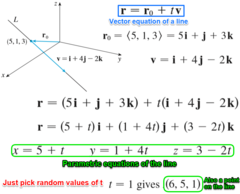 Identify the given point as r₀ and the parallel vector as v and plug into the vector equation of a line and simplify. To find additional points on the line simply assign random numbers to the parameter t
Find a vector equation and parametric equations for the line that passes through
the point (5,1,3) and is parallel to the vector
i + 4j – 2k
Also, find another point on the line 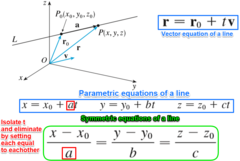 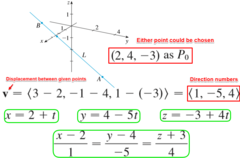 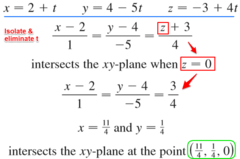 Use the given parametric equations to find the symmetric equations then insert 0 for z and solve for x and y
At what point does the following line intersect the
xy plane?
x = 2 + t
y = 4 – 5t
z = ⁻3 + 4t

First compare the direction numbers (coefficients of t) of the two lines, if they are scalar multiples of each other then the lines are parallel. Next, set each corresponding component equation equal to each other, solve for 2 of the 3 equations and if the t values found satisfy the third equation then the lines intersect at that point. Since neither of these are true in this case the lines are skew
Show that the lines L₁ and L₂ are skew lines
L₁:
x = 1 + t
y = ⁻2 + 3t
z = 4 – t
L₂:
x = 2s
y = 3 + s
z = ⁻3 + 4s
False, only a vector perpendicular to a plane fully describes its direction
A vector parallel to a plane is enough to describe the direction of the plane
(T/F) 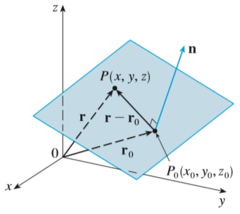 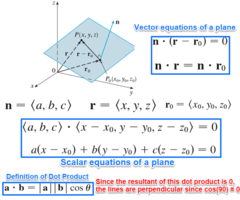 Use the scalar equation of a plane derived from use of dot products, plug in the components of the normal vector and the point on the plane, and simplify
Find an equation of the plane through the point,
(2,4,⁻1)
with normal vector
n = <2,3,4> 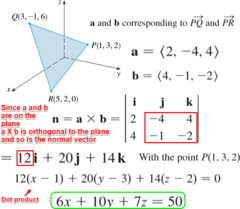 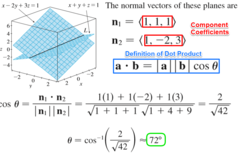 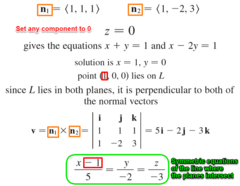 First find a point on L. For instance, to find the point where the line intersects the xy-plane set z = 0 in both plane equations to get the equations,
x + y =1 and
x – 2y = 1
whose solution is
x = 1 and y = 0
So the point (1,0,0) lies on line L.
Since L lies in both planes it is perpendicular to both normal vectors so use the cross product of the normal vectors and create symmetric equations
Find the symmetric equations for the line of intersection L of the planes
x + y + z = 1
x – 2y + 3z = 1 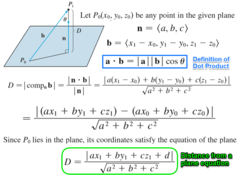 In order for planes to be parallel their normal vectors must be parallel. by setting 2 components of the equation of one plane to 0 and solving for the other component it is possible to find a point on the that plane. Use this point on one plane and the normal vector of the other in the distance from a plane formula
Find the distance between the parallel planes,
10x + 2y – 2z = 5 and
5x + y – z = 1