A vector function is simply a function whose domain is a set of real numbers and whose range is a set of vectors
Vector function (definition)
The component functions of this vector equation are,
f(t) = t³
g(t) = ln(3-t)
h(t) = √t
and the domain of r is the interval,
[0,3)
since ln(0) is undefined and the square root of a negative number is also undefined
What are the component functions of the vector function,
r(t) =
We will write a custom essay sample on
Calculus 10.7 (Vector Functions &amp; Space Curves)
or any similar topic only for you
Order now 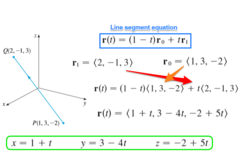