1) A set of parametric equations that together describe a curve.

A vector valued function can be viewed as?

The components of a vector valued function. Which are functions themselves.
Component functions?
We will write a custom essay sample on
Calculus: Vector Functions, Curvature, Motion in 3D
or any similar topic only for you
Order now 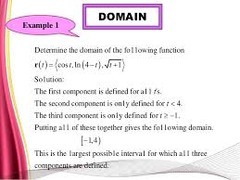 the set of all t’s for which each of the component functions are defined.

Basically you need to consider the domain for each function individually. Then combine them for the domain of the entire vector function.

Domain of a vector function? 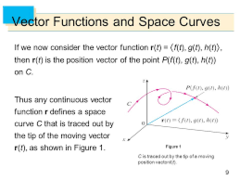 A vector function graphed in 3-D.

Different from a plane curve in that it is not confined to a single plane.

The tangent vector when only direction is concerned.

Just divide the tangent vector by its magnitude.

Arc Length of a vector function on an interval?

A curve with no discontinuities or sharp corners.

What is a smooth curve? 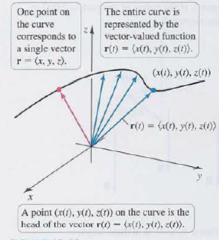 a point (x(t), y(t), z(t)) on the parameterized curve is also the head of a position vector:

How is a vector valued function viewed graphically?

gives the velocity in the x, y, and z direction.

The magnitude gives the objects speed.

Velocity vector? What does the magnitude of this vector produce?

gives the acceleration in the x, y, and z direction.
Acceleration vector?

Simply take the derivative of each component function.

This is the Tangent Vector. Important in that it points in the direction of the curve’s orientation and by extension the direction an object is going.

r'(t) != 0 anywhere along its interval as that would mean the tangent line is neutral and points in both directions.

How is the derivative of a vector-valued function taken?

What is this known as and why is it important?

Basically just take the integral of each component function but remember +C is a vector this time.
How is the indefinite integral of a vector valued function taken?

Take the integral of each component function.
How is the definite integral of a vector-valued function taken?

Points in the direction that the curve is turning. It is orthogonal to the tangent vector.
Unit Normal Vector