Can determine whether a particular set of arms will form a stable molecule and what that molecule may look like.

Lewis Model
We will write a custom essay sample on
Chapter 10 Lewis Structures
or any similar topic only for you
Order now
Atoms with 8 valence electrons or 8 dots.

For Helium, a duet represents a stable atom.

Octet Rule
Metals bonding with non metals where electrons are transferred from metal to non metal.

The attraction between the Cation and Anion becomes and Ionic Compound.

In the Lewis Model, we represent this by moving electron dots from the metal to the nonmetal.

Electrons that are only on one atom (:)
Lone pair

Form Diatomic molecules. Cl – Cl or H-H (Fill in dots along with 2 for the dash to get octet)
Halogens

When you do not have enough electrons to give each atom an octet, you convert a lone pair into an additional bonding pair by moving it into the bonding region.

Double bonds are shorter and stronger than single bonds

Even shorter and stronger than double bonds.

N2 is a triple bond and very difficult to break, making N2 a relatively unreactive molecule 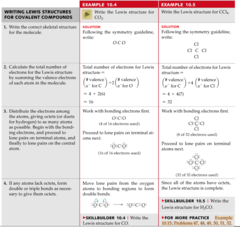 (Hydrogen can never be in the middle and will always be a Terminal Atom, or on the ends)

2. Calculate total number of electrons for lewis structure by summing the valence electrons of each atom in the molecule.

(Any main group Atom or Group1A – 8a the valence electrons equal the group number.)

3. Distribute the electrons among the atoms, giving octets (or duets for hydrogen) to as many atoms as possible.

Begin by placing two atoms or dashes between each pair of atoms. Then distribute to terminal atoms and then central atoms giving octets to as many as possible.

4. If any atoms lack an octet, form double or triple bonds as necessary to give them octets.

Do this by moving lone electron pairs from terminal atoms into the bonding region with the central atom.

Writing structures for Covalent Compounds
Atoms that will always be at the ends of a skeletal structure.
Terminal Atom Pay attention to charge of the ion. 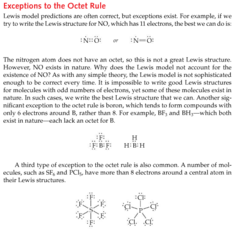 Lewis model predictions are often correct, but exceptions exist. NO, has 11 electrons, end up with a double bond but no octet for N.

Lewis model is not perfect, as it is a theory, not sophisticated enough for every situation.

Another exception is common, molecules such as SF6 and PCL5 have more than 8 electrons around a central atom in their structures. 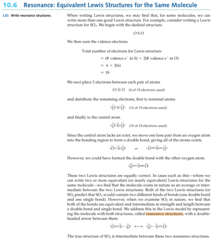 Use when you cannot get central atom in an octet. Move lone pair from terminal to central atom to start forming double bonds until central octet has been created.

Based on the idea that electron groups (one pairs, single bonds or multiple bonds) repel each other.

This repulsion between negative charges of electron groups on the central atom determines the geometry of the molecule.

Geometry determined by repulsion of the two double bonds on central carbon atom. These 2 electrons groups get as far away as possible, resulting in bond angle of 180 degrees and linear geometry for CO2
Linear Geometry 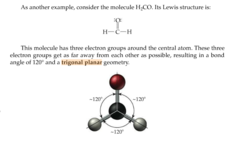 3 electron groups around central atom, get as far away from each other as possible, resulting in a 120 degree angle and Trigonal Planar geometry
Trigonal Planar 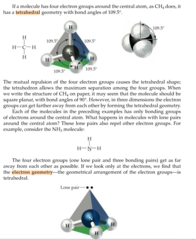 However, Molecular geometry of the ATOMs here is TRIGONAL PYRAMIDAL 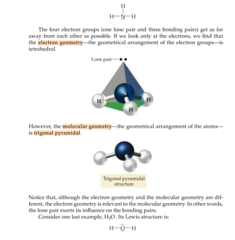 Geometric arrangement of the ATOMS here. 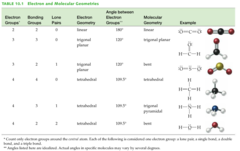 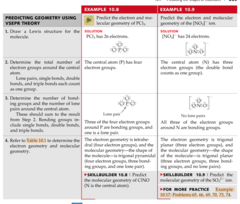 Molecular Geometry Notation from this book
The ability of an element to attract elections within a covalent bond.

Oxygen is more electronegative than hydrogen which means on average, the shared electrons are more likely to be found near the oxygen atom than near the hydrogen atom.

Electronegativity
Result of this uneven electron sharing, a separation of charge within the bond.

H-O-H example. Consider one of the two OH bonds:

Since the election pair is unequally shared with oxygen getting the larger share, the oxygen atom has a partial negative charge, symbolized by S- (similar to an S or delta minus).

The hydrogen atom that gets the smaller share has a partial positive charge symbolized by S+ (delta plus). The result of this uneven electron sharing is the Dipole moment.

We call covalent bonds that have a dipole moment polar covalent bonds. The magnitude of the dipole meant and degree of polarity of the bond is dependent upon the electronegativity difference between the two elements in the bond and the length of the bond.

For a fixed bond length, THE GREATER THE ELECTRONEGATIVITY DIFFERENCE, THE GREATER the DIPOLE MOMENT and the MORE POLAR the bond.

Dipole moment
Covalent bonds that have a Dipole moment.
Polar Covalent Bonds
Electronegativity INCREASES as we move toward THE RIGHT ACROSS A PERIOD.

Electronegativity DECREASES as we move DOWN A COLUMN

Electronegativity of the Elements

Electronegativity INCREASES as we move toward THE RIGHT ACROSS A PERIOD.

Electronegativity DECREASES as we move DOWN A COLUMN 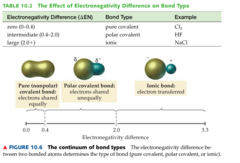 The Effect of Electronegativity Difference on Bond Type

Electronegativity bond examples
If two elements with IDENTICAL ELECTRONEGATIVITIES from a COVALENT BOND there is NO DIPOLE MOMENT.

EX: Chlorine molecule composed of two chlorine atoms (Which of course have identical electronegativities) has a pure covalent bond in which electrons are evenly shared. There is NO DIPOLE MOMENT and the molecule is NONPOLAR

Chemical Bonding effects in detail
No dipole moment due to a PURE COVALENT BOND in which ELECTRONS ARE EVENLY SHARED due to having identical electronegativity.
Nonpolar
If there is an immediate ELECTRONEGATIVITY DIFFERENCE between the two elements, such as between TWO DIFFERENT NONMETALS.

Polar Covalent
Is one with polar bonds that add together (they do not cancel each other out) to form a dipole moment.

For diatomic, we can easily tell polar from non polar molecules.

If a diatomic molecule contains a polar bond, than the molecule is polar.

However for molecules with more than two atoms, it is more difficult to tell polar molecules from non polar ones because two or more polar bonds may cancel one another

– A bond is polar if bonding atoms
have different electronegativities.

– IF NO POLAR BONDS, the molecule is NON POLAR.

2. Determine whether the polar bonds add together to form a net dipole moment.

-Must first use VSEPR to DETERMINE GEOMETRY OF MOLECULE.

-Visualize each BOND AS A ROPE PULLING ON THE CENTRAL ATOM.

-Is the MOLECULE HIGHLY SYMMETRICAL?
-Do the PULL OF ROPES CANCEL?
-If so, there is NO NET DIPOLE MOMENT and molecule is NON POLAR.

If the Molecule is ASYMMETRICAL AND PULLS OF THE ROP DO NOT CANCEL, molecule is POLAR

Summary : Determine whether a molecule is polar