Fundamental law of force between any two stationary charged particles.
Coulomb’s Law
By the addition or removal of electrons. This is because protons are “fixed” and larger while electrons are smaller and located towards the outside of the atom and therefor more easily moved.
By what means do atoms become charged?
We will write a custom essay sample on
Chapter 15 physics (Electric forces and Electric Fields)
or any similar topic only for you
Order now
Electric charges are always conserved. Objects become charged because negative charge is transferred from one object to another.
Where does an electric charge come from
Coulomb (C)
What is the SI unit of charge?
e= 1.6 x 10^-19
electrons = -e
protons = +e
What is the charge of e?
Both start with a neutral charge. The electrons from the glass rod are transferred to the silk, leaving a positive charge on the glass rod and negative charge on silk.
What happens when rubbing a glass rod with silk?
Materials in which electric charges move freely in response to an electric force.
conductors
Copper. aluminum, silver.
When a conductor is charged in a small region the charge distributes itself over the entire surface of the material.
What are good conductors and what is the property of charge on a conducting surface?
Materials in which electric charges do not move freely
Insulators
Rubber, glass.
When insulators are charged by rubbing, only the rubbed area is charged. There is NO tendency for the charge to spread.
What are good insulators and what is the property of charge on an insulating surface?
– Negatively charged rod comes close to a sphere which is neutral. The charge on that rod then polarizes the sphere causing the like charges (negative) to be pushed away, and the opposite (positive) charges stay where they are.
– When the rod comes into contact with the sphere the electrons on the rod can flow onto the sphere and neutralizing the charge on the sphere.
– The rod is then removed and the negative charges stay on the sphere leaving it with a net negative charge.
Charging by conduction

– Negatively charged rubber rod is brought near an uncharged sphere.
-The charges in the sphere redistribute (electrons in the sphere repelled by that of the rod
– a grounded wire is connected to the sphere (allowing some electrons to move from the sphere to the ground)
-The ground wire is removed and the sphere is left with extra positive charge .
-remaining electrons distribute evenly leaving a net positive charge.
-No contact was needed for this entire mechanism
Charging by induction
The realignment of charge on the surface of an insulator. (usually in the presence of a charged object)
Polarization
Positively charged balloon inducing a migration of negative charges to the walls surface. Charged comb attracting bits of paper due to polarization of the paper.
Example of polarization
Electric forces have the following properties
– electric force is directly along the line joining two particles and inversely proportional the the square of the separation r between them
– It is proportional to the product of the magnitude of the charges q1 and 12 on the two particles
– it is attractive if the charges are the opposite sine and repulsive if the same sign
Coulomb’s law

Where K (coulomb’s constant) is about 9e9
Force is a vector quanitity.
Coulomb’s law mathematically
To point charges and to spherical distribution charges.
What type of charges does coulomb’s law apply?
The resultant force on any one charge equals the vector sum of the forces exerted by other individual charges that are present.
The Superposition Principle
-Draw diagram of the charges in the prolem
-Identify the charge of interest
-Convert all units to SI
-Use coulomb’s law (determine direction of the force, which is always along the line of the two charges)
-Sum up all the x and y components
-Use the Pythagorean theorem and trigonometry to find the resultant force
Problem solving strategy
Said to exist in the region of space around a charged object. (When another charged object enters the electric field, this field exerts a force on the second charged object)
-it is a vector quanitity
-The direction of the field is defined to e the direction of the electric force that would be exerted on a small positive test charge placed at that point.
*Electric Field 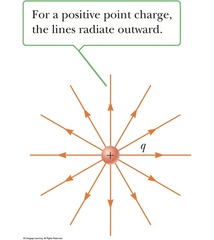 Outward.
Where do electric field lines point in relation to a positive charge 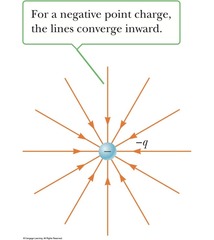 Inward.
Where do electric field lines point in relation to negative charge 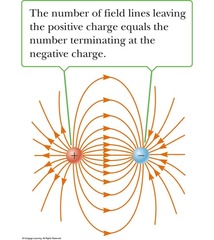 Two equal and opposite charges are next to each other. The lines must come out of the positive charge and into the negative. Electric field lines never cross. Density of the lines show strength.
Electric Dipole (and field lines) 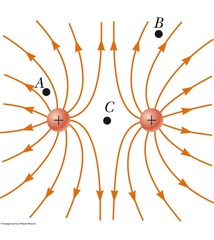 Repel each other. Low field lines in the center indicates a weak field in that region.
Electric Field lines of two like charges. 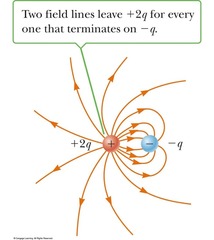 SI units are (Nxm^2)/C
The angle theta is that between the direction of the electric field and that of a line perpendicular to the area.
Electric Flux 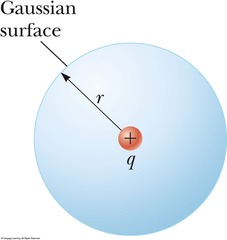 It is a closed surface. 2 dimensional set of points that completely seperates the inner region of space from an outer region. Cube, sphere, etc.
*Gaussian surface 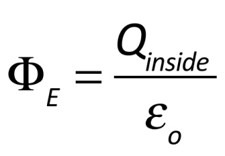 Epsilon knot is the permitivity of free space and equals 8.85e-12
What is the mathematical formula for electric flux? 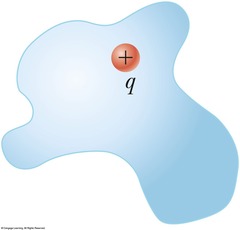 It is useful in spherical symmetry and on an infinite plane. It does not necessarily have to be the the actual surface of the object, but can be an imaginary plane on that surface.
When is Gauss’s law useful for calculating E?