Chapter 3 the biosphere with pictures 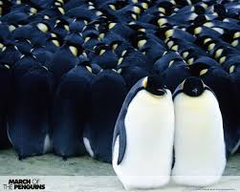 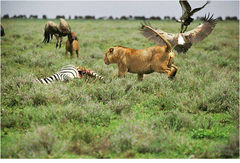 Community
An assemblage of different populations that live together in a defined area
Ecosystem
A collection of all the organisms that live in a particular place, together with their physical environment 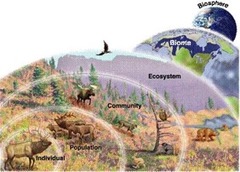 Biome
A group of ecosystems that have the same climate and dominant communities
biosphere
What is the highest level of organization that ecologists study?
Observing , Experimenting, Modeling
What are the three basic approaches scientists use to conduct modern ecological research?
An ecologist might do that to imitate and manipulate conditions that organisms would encounter in the natural world.
Why might an ecologist set up an artificial environment in a
laboratory?
They occur over long periods of time or on such large spatial scales.
Why are many ecological phenomena difficult to study?
they make models to gain insight into complex phenomena.
Why do ecologists make models?
true
Is the following sentence true or false? An ecological model may consist of a mathematical formula. At the core is its need for energy to power life’s processes.
What is at the core of every organism’s interaction with the environment? 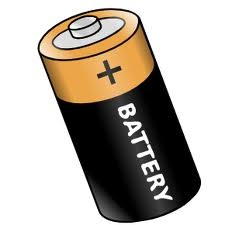 Such organisms rely on the energy stored in inorganic chemical compounds.
What source of energy do organisms use that don’t use the sun’s energy? 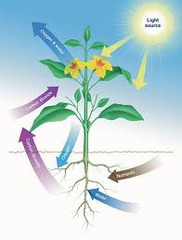 They are organisms that can capture energy from sunlight or chemicals and use that energy to produce food
autotrophs
They make their own food.
Why are autotrophs also called producers?
They use light energy to power chemical reactions that convert carbon dioxide and water into oxygen and energy-rich carbohydrates such as sugars and starch.
What do autotrophs do during photosynthesis?
-Plants
-Algae
-Photosynthetic bacteria/cyanobacteria
For each of the following, write which kind of autotroph is the main producer.
-Land:
-Upper layers of ocean:
-Tidalflatsandsaltmarshes: 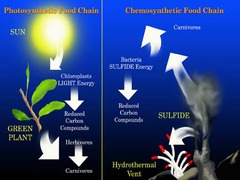 chemosynthesis
process by which organisms use chemical energy to produce carbohydrates.
They live in remote places, such as volcanic vents on the deep-ocean floor and hot springs in Yellowstone Park. They also live in morecommon places, such as tidal marshes along the coast.
Where do bacteria that carry out chemosynthesis live? 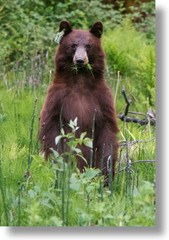 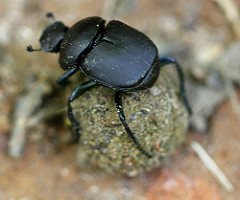 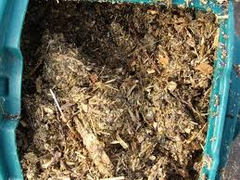 Plant and animal remains and other dead matter are collectively called
detritus
It flows through an ecosystem in one
direction, from the sun or inorganic chemicals to autotrophs (producers) and then to various
heterotrophs (consumers).
How does energy flow through an ecosystem?
Food Chain
A series of steps in which organisms transfer energy by eating and being eaten
Food Web
A network of complex interactions formed by the feeding relationships among the various organisms in an ecosystem
It links together all the food chains in an ecosystem.
What does a food web link together?
trophic level
It is a step in a food chain or a food web.
Producers
In a food web, what organisms make up the first trophic level
it depends on the trophic level below it
What does a consumer in a food chain depend on for energy?
ecological pyramid
diagram that shows the relative amounts of energy ormatter contained within each trophic level in a food chain or food web.
That is because organisms use much of the energy that they consume for life processes.
Why is it that only part of the energy stored in one trophic level is passed on to the next level?
biomass
It is the total amount of living tissue within a trophic level.
It represents the amount of potential food available for each trophic level in an ecosystem.
What does a biomass pyramid represent?
It shows the relative number of individual organisms at each trophic level.
What does a pyramid of numbers show?
That is because each trophic level harvests
Heat only about one tenth of the energy from the level below.
Why can each trophic level support only about one tenth the amount of living tissue as the level below it
The four are oxygen, carbon, hydrogen, and nitrogen.
What are the four elements that make up over 95 percent of the body in most organisms?
Unlike the one-way flow of energy, matter is recycled within and between ecosystems
How is the movement of matter through the biosphere different from the flow of energy?
biogeochemical cycles
Matter moves through an ecosystem in
They connect biological, geological, and chemical aspects of the biosphere.
What do biogeochemical cycles connect?
transpiration
Water can enter the atmosphere by evaporating from the leaves of plants in the process of
nutrients
They are all the chemical substances that an organism requires to live.
Carbon cycle
Phosphorus cycle
Nitrogen cycle
What are the three nutrient cycles that play especially prominent roles in the biosphere?
it is the key ingredient in all living organisms.
Why is carbon especially important to living systems?
a. As carbon dioxide gas in the atmosphere
b. As dissolved carbon dioxide in the oceans
c. As coal, petroleum, and calcium carbonate rock found underground
What are three large reservoirs where carbon is found in the biosphere?
Photosynthesis
In what process do plants use carbon dioxide?
They require it to make amino acids, which in turn are used to build proteins.
Why do all organisms require nitrogen?
The atmosphere is the main reservoir.
What is the main reservoir of nitrogen in the biosphere?
nitrogen fixation
It is the process by which bacteria convert nitrogen into ammonia.
denitrification
It is the process by which some soil bacteria convert nitrates into nitrogen gas
The process releases nitrogen into the atmosphere once again.
What role does denitrification play in the nitrogen cycle?
It forms part of important life-sustaining molecules such as DNA and RNA.
Why is phosphorus essential to living things?
It is the rate at which organic matter is created by producers.
What is the primary productivity of an ecosystem?
It will limit an organism’s growth
If a nutrient is in short supply in an ecosystem, how will it affect an organism?
It is called that when an ecosystem is limited by a single nutrient that is scarce or cycles very slowly.
When is a substance called a limiting nutrient
Nitrogen
In the ocean and other saltwater environments, what is often the limiting factor?
Phosphorus
What is the typical limiting factor in streams, lakes, and freshwater environments?
The result is often an immediate increase in the amount of algae and other producers, which is called a bloom.
When an aquatic ecosystem receives a large input of a limiting nutrient, what is often the result, and what is this result called?
They occur because when there are more nutrients available, the producers can grow and reproduce more quickly.
Why do blooms occur?
chemosynthesis
The process by which organisms use chemical energy to produce carbohydrates is
ecosystem
A collection of all the organisms that live in a particular place, together with their physical
environment, is a(an)
nutrient
A chemical substance that an organism requires to live is a(an)
producers
Autotrophs, which make their own food, are also called
biome
A group of ecosystems that have the same climate and dominant communities is a(an)
biogeochemical cycle
A process in which elements, chemical compounds, or other forms of matter are passed from one organism to another and from one part of the biosphere to another is a(an)