Is there a metal present?

NO: This is type III, use prefixes (ex: Dioxygen difluoride)

Rules for naming binary compounds
1. Cation always named first and the anion is named second.
2. A monatomic cation takes its name from the name of the element. For example, Na+ is called sodium in the names of compounds containing this ion.
3. A monatomic anion is named by taking the root of the element name and adding -ide. (ex: Cl- ion is called chloride)
Rules for Type 1 Binary Compounds: Binary Ionic Compounds
We will write a custom essay sample on
Chemistry: Rules for Naming Compounds, Polyatomic Ions
or any similar topic only for you
Order now
Using the principle of charge balance, determine the cation charge.
Include in the cation name a Roman numeral indicating the charge.
Type 2 Binary Ionic Compounds
Both type 1 and type 2 binary ionic compounds can involve polyatomic ions that must be memorized

Note on several series of polyatomic anions that contain an atom of a given element and different numbers of oxygen atoms: these anions are called OXYANIONS

When more than two oxyanions make up a series, hypo- (less than) and per- (more than) are used as prefixes to name the members of the series w/the fewest and the most oxygen atoms

can think of -ite being the suffix for the “sprite,” or the oxyanion with the smaller number of oxygen atoms

Ionic compounds with polyatomic ions
Binary covalent compounds are formed between two nonmetals. Although these compounds do not contain ions, they are named very similarly to binary ionic compounds:

An acid can be viewed as a molecule with one or more H+ ions attached to an anion. (So, yes: HCL is an acid)

If the anion does not contain oxygen, the acid is named with the prefix hydro- and the suffix -ic.
example: HCL is hydrochloric acid

1. If the anion name ends in -ate, the suffix -ic is added to the root name. ex: H2SO4 contains the sulfate anion (SO4 2-) and is called sulfuric acid. 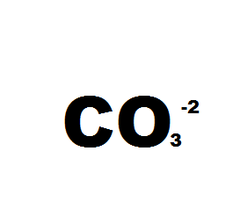