Internal Anatomy of an Insect

Generalized insect;
Cockroach
Insect that has all regular or typical forms;
Give an example
False. Most are fused and have dual function.
T/F
Most organ system of insect have one specific function.
We will write a custom essay sample on
Internal Anatomy of an Insect
or any similar topic only for you
Order now
Bristle
Part of the insect tegument similar to human hair follicle
Seta
Hair of an insect; usually causes physical allergy
Cuticula and Epidermis
2 main divisions of the integument
Epicuticle
First layer of the Cuticula
It is covered by chitin
Reason why the epicuticle does not expand
Exocuticle and endocuticle
2 other sublayers of the cuticula
False. Both the exocuticle and endocuticle expand
T/F only the Endocuticle is able to expand
True.
T/F the cuticula does not have openings
Spiracle (found on each segment)
Openings in the lateral part, functioning primarily for gas exchange
Somata
Refers to one segment
Tagmata
Refers to a group of segment
True
T/F each segment of an insect has its own heart and ganglion
Ganglion
Internal organ responsible for locomotor and wing movement
Prothorax, Mesothorax, Metathorax
Three segments of the thorax
False, in the mesothorax and the metathorax
T/F Wings can be found in the mesothorax and the prothorax
True
T/F A fly has its prethoracic segments fused
The head area
The development of the other parts of the body is controlled in?
Brain; expansion of the abdomen
This dictates the extent to which the insect is going to eat
Development and Metamorphosis
Two physiological processes of an insect
Metamorphosis
Process involving a change in form and structure
Ecdysone (molting hormone) and Corpora Allata
What enzyme and structure dictates metamorphosis?
Ventral side
On which side is the nerve found?
Haemolymph
internal integument “blood”
Dorsal vessel
Connects one heart to another
Alary muscles
Supports movement and the circulatory system
Dorsal diaphragm
Found between each alary muscles
Open type, because of the spiracles
What type of respiratory system do insects have?
Foregut, Midgut, and Hindgut
Three sections of the insect digestive and excretory system
Crop
This serves as a temporary storage prior to grinding; enlargement of the foregut
Proventriculus or Gizzard
Hardened portion lined with several teeth for grinding
8-12 teeth
How many teeth are inside the gizzard?
Gastric Ceca
The end part of the foregut and serves as boundary between the foregut and midgut; elongated pouches at the beginning of the midgut; looks like spaghetti noodles
Bacteria
What does gastric ceca contain which aid in digestion
pounded
Food is in _______ form once it enters the midgut and leaves the gastric caeca
Ventriculus
The primary area for digestion and absorption
Midgut
This is the ventriculus or the true stomach
Hindgut
Where does final resorption of water, salts, and nutrients from the feces and urine takes place before excretion
True
T/F
The hindgut is coiled
Intestine
Rectum
Anus
Components of the hindgut
False
Malpighian Tubules is a part of the excretory system
T/F
Malpighian Tubules is a part of the digestive system
Malpighian Tubules
Removes nitrogen-containing wastes and regulate water and salts in the hemolymph; This is where all the waste – salt and urea – are kept and passes through; appears as white thread
Looks like driftwood because they have to conserve moisture
What does the feces of insects look like and why?
4 days
Cockroaches can survive without food for how many days?
12 days
For how many days can cockroaches survive with water only?
Ether / Diethyl ether
What is used in anesthesizing the cockroach for dissection?
Underside of the wings
Which part of the wings are pinned first?
Diagonally or sideways, in order not to obstruct the view
How are pins placed during dissection?
1. The cockroach is anesthetized
2. The underside of the wings are then pinned to the dissection plate.
3. The legs are removed and additional pins are inserted at the base of the wings
4. The side or ventral cuts along the abdomen are made to remove the exoskeleton. Cut along the pleurite and expose the internal organs.
5.The fat body is teased apart with forceps and removed to expose the internal organs more clearly
Procedures in cockroach dissection 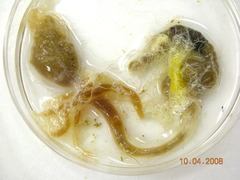 Digestive system
The most noticeable system of organs we see once the fat body is removed
foregut
Digestion of complex sugars begins in ________
Open
Hemolymph flows through this blood vessel and also throughout the insect’s body cavity
What kind of circulatory system do cockroaches have?
spiracles, trachea, and tracheoles
Main structures in respiratory system, which function in gas transport and exchange
spiracles
Carbon dioxide leaves the body through the __________
cerci
This structure is used for food location
False
Cerci are found in both males and females
T/F
Cerci are only found in males
False
Styli are only found in males
T/F
The styli are only found in females
Antennae
This is the sensory organ for mating and courtship 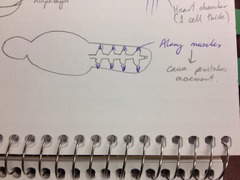 Alary muscles
Fan-shaped white materials at the dorsal side
Heart
Depressions at the center, between each alary muscle
dorsal diaphragm
Above and below alary muscles are
No. Wings can only be found in the mesothoraxand metathorax
Is there an appendage (wings) for an adult well-developed insect on its prothorax?