A molecule that is not superimposable on its mirror image. Typically a carbon atom bonded to four different atoms or molecules.
chiral
three different substitutents often have plane of symmetry. and rotation of 180 will allow molecule to be superimposed on mirror image
achiral
We will write a custom essay sample on
Organic Chemistry Chapter 5 Stereochemistry
or any similar topic only for you
Order now 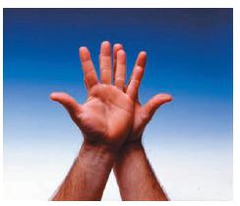 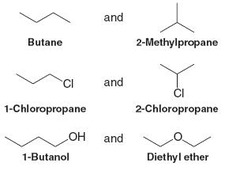 what type of isomer
Constitutional isomers
the study of the three-dimensional structure of molecules
stereochemistry
molecules that are mirror images of each other
Enantiomers
non mirror image of configurational isomers. cis and trans alkenes are them. possible when a molecule has two or more stereogenic centers that differ at some but not alll of the centers. they require multiple chiral centers.
Diastereomers

Diastereomers or Enantiomers
Diastereomers
Enantiomers occur only with compounds whose molecules are chiral.
True
Classify each of the following objects as to whether it is chiral or achiral:
(a) A screwdriver
(b) A baseball bat
(c) A golf club
(d) A tennis shoe
(e) An ear
(f) A woodscrew
(g) A car
(h) A hammer
5.1 (a) Achiral
(b) Achiral
(c) Chiral
(d) Chiral
(e) Chiral
(f) Chiral
g) Chiral
(h) Achiral
What structural feature can we use to know when to expect the possible existence of a pair
of enantiomers?
One way (but not the only way) is to recognize that a pair of enantiomers is
always possible for molecules that contain a single tetrahedral atom with four
different groups attached to it.
carbon atom bonded to four different groups
chirality centers
The presence of a single chirality
center in a molecule guarantees that the molecule is chiral and that enantiomeric
forms are possible.
tip
An atom with an interchange of groups produces a stereoisomer.
stereogenic center

achiral or chiral
achiral
…
carbon with 4 different groups attached to it. dont have a symmetric plane. chiral
stereogenic center
…
…
A molecule will be chiral if it possesses a plane of symmetry.
A molecule will not be chiral if it possesses a plane of symmetry.
…
a set of rules for specifying the configuration about a stereocenter
R,S-system
…
…
…
…
…
Compounds that rotate in a plane of polarized light
optically active compounds
an optical device used to measure the rotation of the plane of vibration of polarized light
polarimeter
A device that permits the passage of light waves vibrating in only one plane.
polarizer
A method based on the measurement of optical rotation at many different wavelengths,
called
optical rotatory dispersion
A mixture that contains equal amounts of the (+) and (-) enantiomers. Racemic mixtures are not optically active.
racemic mixture
Only one enantiomer is present; it will have an observed specific rotation
enantiomerically pure
What structural feature can we use to know when to expect the possible existence of a pair
of enantiomers?
One way (but not the only way) is to recognize that a pair of enantiomers is
always possible for molecules that contain a single tetrahedral atom with four
different groups attached to it.
Any atom at which an interchange of groups produces a stereoisomer is called a
stereogenic
center
…

(a), (b), (e), (g), and (i) do not bave cbirnlity centers
A molecule will not be chiral if it possesses a
plane of symmetry
…
rules on how to Assign (R) and (S) Configurations
1. Each of the four groups attached to the chirality center is assigned a priority or
preference a, b, c, or d. Priority is first assigned on the basis of the atomic number.

2. When a priority cannot be assigned on the basis of the atomic number of the atoms
that are directly attached to the chirality center, then the next set of atoms in the unassigned
groups is examined. This process is continued until a decision can be made.
We assign a priority at the first point of difference.

3. We now rotate the formula (or model) so that the group with lowest priority (d) is
directed away from us:

priority is assigned to each group bonded to the chiral carbon, highest priority = #1, lowest = #4, higher atomic number= higher priority
Cahn-Ingold-Prelog
Assign (R) or (S) designations to compounds:
…
…
The molecules of enantiomers are not superposable and, on this basis alone, we have concluded
that enantiomers are different compounds. How are they different? Do enantiomers
resemble constitutional isomers and diastereomers in having different melting and boiling
points?
The answer is no
Pure enantiomers have identical properties?
Yes
Mixtures of the enantiomers of a compound have the same properties than pure samples
of each,
false they are different
Compounds that rotate in a plane of polarized light
optically active compounds 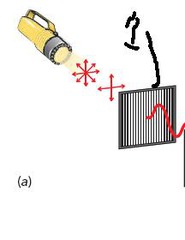 what type of instrument is this
polarimeter

name 1-4
1. light source
2. polarizer
3. samplke cell
4. analyzer
In chemistry, a mixture that has equal amounts of left- and right-handed enantiomers of a chiral molecule. (no optical activity)
Racemic
Difference between the percentage of two enantiomers in a mixture
enantiomeric excess
a single starting material can give two or more stereoisomeric products but yields one of them in greater amounts than the other
Stereoselective reactions
a stereoselective reaction in which the product stereoisomers are enantiomers
enantioselective
A reaction giving diastereomers in unequal amounts.
diastereoselective
catalyzes a reaction called hydrolysis, whereby an ester (Section
2.10B) reacts with a molecule of water to produce a carboxylic acid and an alcohol.
lipase
separating enantiomers based on the difference in their rate of reaction with an enzyme
kinetic resolution
…
Many drugs are chiral, and often they must interact with a chiral receptor or a chiral enzyme to be effective. A mirror image may be ineffecient or elicit a totally different response. Ex. Naproxen S versus R. Single enantionmers would function much better but difficult to isolate and costly. Thus there are many racemic mixes.
Chiral Drugs
how many chiral centers do Cholesterol have
more than 1 Cholesterol
In compounds whose stereoisomerism is due to chirality centers, the total number of
stereoisomers will not exceed 2n, where n is equal to the number of chirality centers.
sterioisomerism rule
…
Diastereomers have different physical properties—different melting points and
boiling points, different solubilities, and so forth
Diastereomers have different physical properties—different melting points and
boiling points, different solubilities, and so forth
Some molecules are achiral even though they contain chirality centers.
true
an achiral compound possessing two or more chiral centers that also has chiral isomers
meso compound
…
…